If you’re a bride, it’s understandable for you to want to share some wedding responsibility. After you’ve selected your wedding party, it’s easy to start handing out tasks to your Maid of Honor, and she probably wants to help, but keep these things in mind before you clutter her inbox with weekly wedding update emails:

m
The role of Maid of Honor only has one responsibility: showing up and standing beside you on your wedding day. You didn’t pick her because you want a free wedding planner; you picked her because she’s the best friend you’ve got (aside from your fiancé). Don’t think that she HAS to sit up every night the month leading up to the wedding designing dessert tables and addressing invitations. It’s not a crime to ask for her help, but don’t expect it as a part of the Maid of Honor contract. Talk to her as soon as you can about how much responsibility she wants – NOT how much you expect.
Bachelorette parties and bridal showers aren’t part of the deal either. It isn’t the responsibility of your Maid of Honor to plan and pay for all of your pre-wedding events, and you should probably hold off on asking for them. If someone (such as an aunt or bridesmaid) wants to host a shower for you, your level of involvement should be providing a short list of people you would like at the event (making sure that they’re all also invited to the big day); It’s up to the hostess to figure out the budget and how many people she’ll be able to afford. Pushing a large guest list or taking the initiative to assign parties to your Maid of Honor will cause undue stress and some unintended resentment. Take it easy – this is one part of the wedding process you don’t need to fret over!
In the final weeks leading up to your wedding, you will probably be very focused on your impending nuptials – and that is completely understandable. Your Maid of Honor, however, probably has other duties that she’s trying to juggle in addition to her responsibilities as your right-hand woman. She probably has a job, a family, a cat, and an infinite number of other things weighing on her mind. Is she still in school? Working on her master’s thesis? None of these things will pause for her. Try to understand if she has to slip out of a Mani/Margi/Pedi Party a little early or can’t make it to your place for invitation addressing during lunch on a weekday. She would do the same for you! 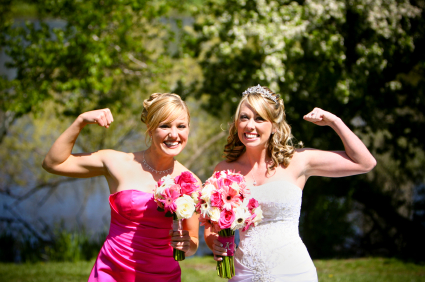